The U.S. Census Bureau just released new population estimates for the past decade, showing Buckeye is the second fastest growing city, on a percentage basis, in the United States since 2010. The Census estimates that Buckeye’s population on July 1, 2019 was 79,620, representing a 56.6% increase since the 2010 Census. 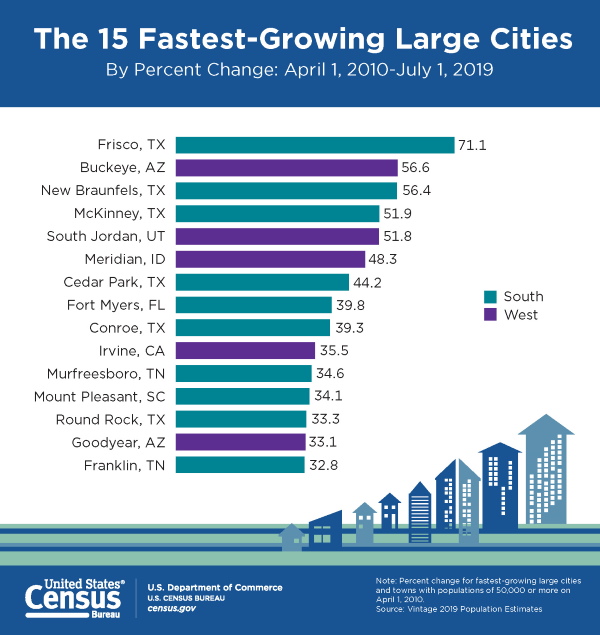 This places the city as the second fastest growing major city (over 50,000) in the country after Frisco, Texas. Buckeye was the only Arizona city to make the list of the top ten fastest growing cities since 2010.

Buckeye city officials estimate the current population is about 89,000.

The city is likely to remain as one of the fastest growing cities for years to come. With a planning area of over 640 square miles, it is only five percent built out today.

According to the city’s Economic Development Director, David Roderique, “The city continues to focus on attracting advanced manufacturing, energy, and logistics/distribution companies to Buckeye. We’re a multi-modal community strategically located to offer efficient, cost-effective transportation options to connect customers with their products.”

In 2019, approximately 2,650 single-family residential permits were issued in Buckeye. So far, for the first 4 months in 2020, permits are exceeding that by 14 percent.

Buckeye also continues to have tremendous opportunities for retail shops, services and employment due to our rapid growth.

Each year, the U.S. Census Bureau releases estimates of the population for the nation, states, counties and Puerto Rico. Annual estimates for resident populations are produced by measuring population change, which includes all people currently residing in the United States.

To learn more about living, working, playing or relocating your business to Buckeye, please visit growbuckeye.com/